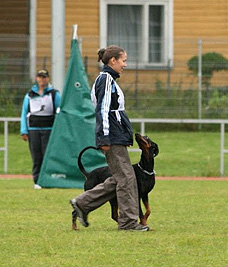 My journey in dog training world started in 2004, when I got my first dog – dobermann Haus Riback Adele, at home simply Nali. I was actually quite frequent visitor at obedience competitions even before getting my own dog and I remember of being enchanted by the wonderful teamwork of obedient canines and their owners. I started to train obedience with Nali also as soon as possible in Tartu. My first trainer was always enthusiastic Marika Mikk. Between the weekly sessions I practiced by myself daily, sometimes also two times a day. My way of thinking about dog training was also greatly influenced by Tatjana Tšernjakova, who guided some training seminars at that time. In 2005 I moved to Tallinn and had an oppurtunity to train with Tatjana on regular basis. Later that year I also joined Aivo's training group. From that time on, Aivo has been our main advisor in all three areas of IPO – tracking, obedience and protection.

I am very happy to have had Nali as my first dog, as I was able to compete at highest levels in KK and IPO with her and therefore gain lots of valuable experience. I really enjoyed training Nali. As she had very nice level of energy and prey drive, it was easy to motivate her, but at the same time it required developing the skills to control and channel that energy. It was also important to give her support in new situations, as the type of her nervous system was quite sensitive. With Nali we won 3 championships in national obedience and 2 in IPO:

Our best scores in obedience in highest classes were 135p in KK-3 (max 140, 96%) and 91p in IPO-3. Nali's homepage is HERE, all our trial and competition results can be found HERE and videos can be seen HERE.

Experience and beliefs as trainer

Since 2008 I started to instruct other dog owners in obedience in addition to training my own dog. By 2009 I had fullfilled the criteria for becoming Estonian Kennel Union's official obedience trainer. I have trained dog owners with various backgrounds and different dogs, there have been belgian shepherds, dobermanns, german shepherds (from working as well as show lines), giant schnauzers, jack russell terriers, beaucerons, labrador and golden retrievers, mixes, border collie, newfoundland, bernese mountain dog. The goals for joining the training group have also been very different – starting from polite behaviour on leash until world championships in IPO. Today I am mainly working with people interested in dogsport. In addition to being main trainer I have also supervised doghandlers, that were already competing at the highest classes - Aivo & Deli and Kairi & Apollon. In 2013 following trainees made successful performances in IPO: Reelika & Fiona, Kristi & Eileen, Andres & Blakcy. Following trainees have achieved over scores over 90 points in obedience: 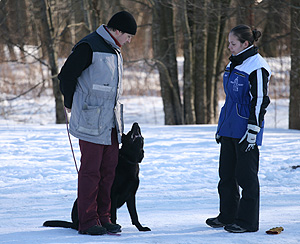 I believe, that it is very important to find the suitable training method for each dog according to its nature. At the same time, it is as important to take owners experience and abilities into consideration. My goal as a trainer is to give people knowledge how to read and analyse their dogs' behaviour and obtain the tools to manipulate it naturally and smoothly, in other words – „speak the dog's language“ :). To achieve this goal we make exercises during the training session and I am always trying to explain their essence. The more people analyse their dog's and their own actions/reactions and practice between our sessions, the faster and better they reach their goals. It is essential for me, that the dogs would work with their handlers in a happy and motivated way, would be as correct as needed and certainly under proper control. A dog should be nice companion and fine member of our society and could also be partner in thrilling sport on top of this.

As I wish to give my undivided attention to each dog and owner, I do mostly individual training. If You wish to train your dog for sport with me, I suggest to contact me as soon as the puppy arrives home (or even before that, if You have such plans). If one wishes to be active in dogsport, the right way of handling and teaching the dog starting from an early age is really important, as it saves a lot of time and effort in the future. Of course it is possible to start also with older puppys or dogs - the final outcome depends very much on qualities of the dog and dedication of the owner! I am always willing to give advice when asked to and also in case it is not possible for me to accept new people to my training group, I will always find time for session or two to have a look at the dog and share my opinion based on that.

I believe that constant learning is very important and therefore have participated in lectures and seminars on dog training over 40 times. The list of the attended seminars can be seen HERE.

I am Estonian Kennel Union's official working judge since 2010 in KK (national obedience) and since 2014 in IPO. The information page about me as EKU's trainer and judge can be found HERE.