We wish a nice holiday season for everyone!

There are photos from 11.10 FH and IPO trials and also from tracking competition JÄLJEHUNT 2014 up now! See under Photos.

Some results from this Autumn have not yet been published on our website. Here they come now:

Oct 18-19 there was IPO competition organized by Tartu SLK URAN. Judge was Pierre Kembel from Sweden and helpers Kristoffer Ullerud and Janar Klement. There were 3 dogs participating from our club and results were following:

***
On Oct 11th we organized this year's last trials in IPO and FH. There were no startres from our club in IPO this time, but is was a real pleasure to host visitors from Belarus, who showed great performances. Judge was Vilve Roosioks and helper Aivo Oblikas. IPO results:

In FH1 participated also Aivo and Tüüp. They showed nice work on first half of the track, but then Tüüp decided to switch to the cross-track. 45 points this time. The nice tracking work until then can be seen also on Aivo's and Tüüp's own page in Our Club section.

***
On Sept 20th and 21st there were ESLÜ's FH Championships and Estonian FH Championships, both judged by Peter Lengvarsky from Slovakia. Our members had following results in FH2:

Congratulations for everyone for great work!! 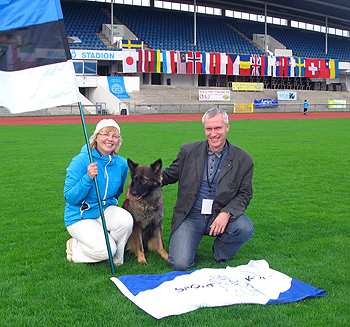 Last weekend our club members started at IPO championships in Estonia and abroad.

Anu and Hundu participated in FCI IPO Championships (judges Urs Meyer, Gerold Schreyer, Hari Arcon; helpers Tommy Hansen, Björn van Stalle) and came back with 247 points (96/74/77 TSB A) and 80th place among 122 participants. They also contributed to first ever team result in Estonian FCI IPO WC history - among 23 full teams (and 36 nations all together) Estonian team placed 14th. Congratulations for your nice work! We are especially proud of Anu's and Hundu's tracking - 96 points in conditions, that were definitely not easy and only 11 dogs achieved "excellent" in tracking this year!

On September 14th there were also EDÜ's Open Championships in IPO, judged by Tatjana Tšernjakova, helpers were Rene Radala and Janar Klement. Reelika & Fiona showed best tracking and best protection of the championships and achieved first place! Congratulations! The points were following: 268 (98/84/86 TSB A).

On August 23-24 there were ESLÜ's Open Championships in IPO. Judge was Robert Jönsson from Sweden and helpers Jevgeni Kaverin and Johan Kruse. We are surely pleased with the results - Reelika & Fiona had once again he best track at the championships and also all the working line dogs from our club achieved more than 90 points in protection! Special congratulations to Taivo and Ruudi, who achieved 2nd place among 10 competitors. This was the cery first competition for both of them. In IPO-2 there were also Riho and Ignis participating, but they had some misunderstandings concerning sit, down and stand and also A-frame, so no result this time. Results with points:

Congratulations, you all did a super job!

On August 30th we organized BH trial with judge Tatjana Tšernjakova. Aivo and Tüüp passed successfully, congratulations! Reet and Ursela did not pass the obedience part this time.

On July 27-28 Estonian IPO Championships were held. Judge was Lene Carlson (Denmark) and helpers Janar Klement and Tõnu Mägi. There were 3 participants from our club who achieved following results: 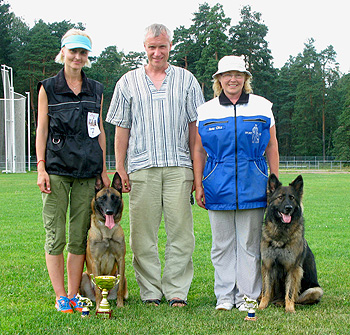 There were also Merike Kungla & Estrellest Hurmuri Käbi participating, but unfortunately Käbi got injured in protection training just few days before the competition and this did not allow this team to show their training level at obedience and protection. They still had very nice track (94p).

We are very proud, that the tracking results of our team members were the three best ones of the championships (98, 98 and 94 points).

Reelika and Fiona were the last team to show their protectionwork and they did a super job with 93 points, this was also the best C part of the championships!

Anu and Hundu were the only team in Estonia to fulfill all the qualification requirements for the FCI IPO World Championships!

Congratulations to all of them!

There are now also 2 new galleries on our home page - photos from Sportkoer's training camp and IPO trial; also videos of B and C parts of Taivo & Ruudi at the trial (on their own page). 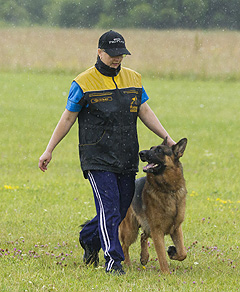 On July 20 we organized another IPO club trial. Judge was Mari Ojarand and helper Aivo Oblikas. All participants passed the trial successfully. Congratulations!

We will add the photos and videos of the trial soon!

29.06 our best tracking dogs competed at FH competition in Jõgeva, that was judged by Peteris Akimovs from Latvia. The entire team passed the demanding FH2 level successfully and the results were following:

Congratulations, you all did a great job!

On the same weekend Aivo was judging Lithuanian biggest IPO competition, plenty of pictures from Vilnius Cup can be seen under Photos!

June was very busy month for our club, there were many trainings and also possibility to participate in various activities and events. Many new galleries can now been seen under Photos - ESLÜ IPO competition, FMBB World Championships, IPO trial and protection seminar with Ari Saari are all up now!

On June 7th we held an IPO trial, that was judged by Tatjana Tšernjakova, helper was Aivo. The results were following:

Congratulations to everyone who achieved new results! 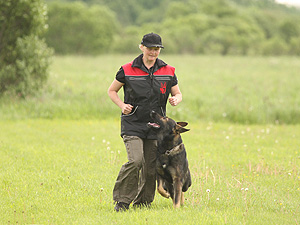 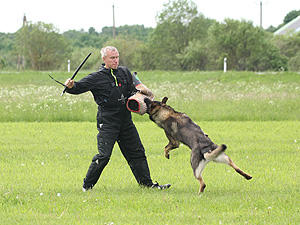 In addition to all that Anu & Hundu got their third IPO-3 result needed for EST IPO CH. Now there is only one missing show result standing between them and the official title. :)

Conrgratulations to everyone and hip-hip-hooray!!! 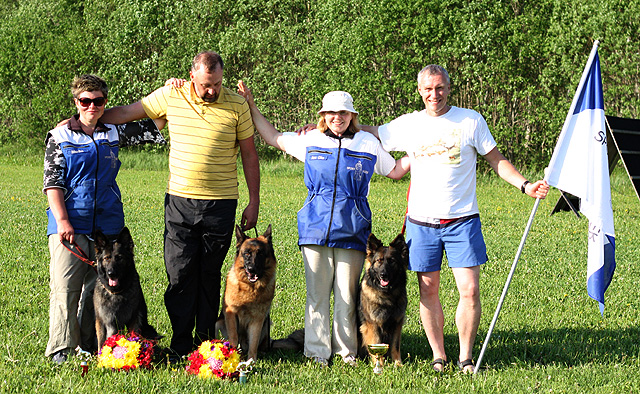 On July 14-15 Ari Saari from Finland will be holding protection seminar in Tallinn. Registration to the seminar of experienced training and competition helper is now open. Seminar is free of charge for all partcipating helpers! More info under Events' link!

Today we had obedience competition for children and youngsters - JUNIOR CUP 2014. The results were following:

Congratulations to everyone, you did super job!!

Photo gallery will be added soon. 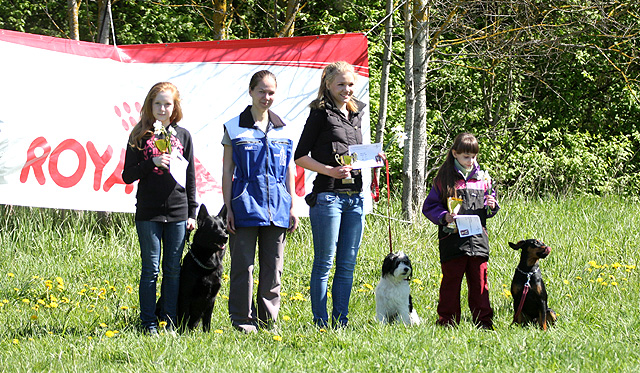 Congratulations to Greta and Anu who succeeded and we hope that everyone will continue to train their dogs for this highly demanding sport!

We are thankful to Helve, Kairi and Marit for laying the tracks and doing a great job. Also we thank Kalev for putting the results and nice photos online in real time and Royal Canin for the awards.

Last week was already quite busy for dogs from our club:

On May 1st there were BH and IPO trials (judge Urve Lageda, helper Janar Klement) and 2 of our members participated:

On May 3rd-4th there was annual ESLÜ main speciality show for german shepherds (judge Hans Ludger-Göke, helpers Rene Radala and Janar Klement). All participants from our club passed the bitework part successfully: 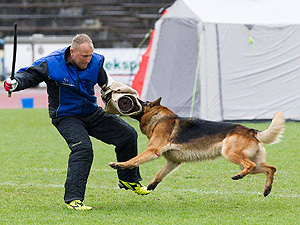 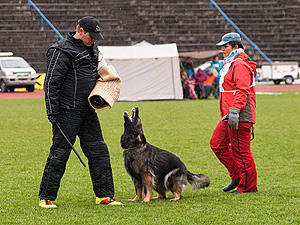 Estonian team is now back from FCI IPO-FH World Championships in Germany and with nice results! Both dogs showed great work in these quite difficult tracking conditions and Estonian team achieved 10th place among 22 participating teams! individual results:

Congratulations again to both handlers, you did super job!!

We will add a photo gallery from the championships soon. 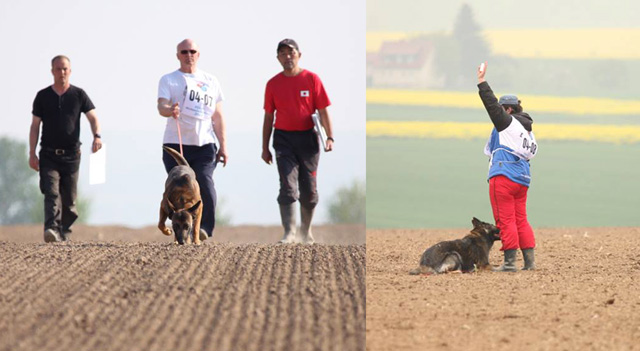 The Estonian team at FCI IPO-FH World Championships consists of Sportkoer's sportsmen - Merike & Käbi, Aarne & Sannu, team captain Aivo. By now our team has nicely arrived to Germany and also made their first tracks there. We are grateful for everyone who have supported them and wish them best of luck in this competition. Most recent information about Estonian team at these championships can be found on respective Facebook page! 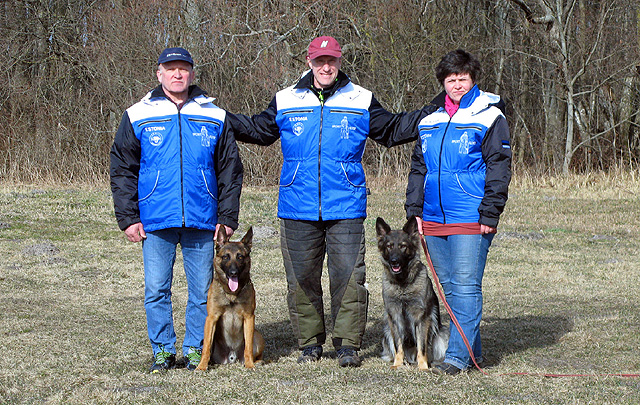 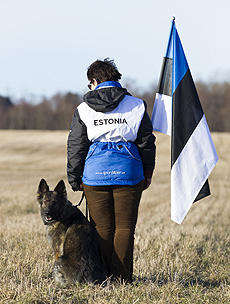 Estonian IPO-FH team will start their journey Germany to World Championships in the middle of April. The team has already been supported from various sources. If there are still people who wish to support the team, we are really grateful!

We also would like to thank everyone who participated in tracking lecture, which helped to raise 385 EUR to the team!

Spring is here and another dogsport season has begun. As in previous years, Sportkoer is organizing multiple events in spring: on May 10, there will be FH competition and a week later, on May 17, JUNIOR CUP 2014 obedience competition for young doghandlers! More information can be found on Events' page! Good luck with training and we are hoping to meet you at competitions! 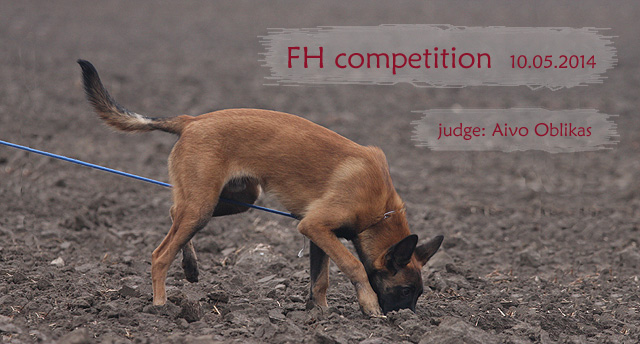 In the beginning of February Aivo was holding tracking and protection seminar "at other side of the Earth" - in New Zealand. Little summary of these events can be fount under Events section and pictures under Photos!

Estonian German Shepherds' Association also awarded the best of this breed from the year 2013. We are proud and happy, that Sportkoer's members have achieved many high places again:

It is also interesting to note, that EGSA's best universal dog is training the IPO-part in our club again. In Sportkoer we have always been thinking this way, that also show-line german sheperds must have drives and “brains” and be trained properly.
Because of this we have given our best to train also show-line dogs as high as possible. And the statistics looks really great - best universal german shepherd (show + IPO) has been trained with our help every year since 2007 (except for 2012, when best placing was 2nd)
2013 1. Toomas & Joop
2012 2. Katriin & Qwinto
2011 1. Piret & Quicken
2010 1. Kairi & Apollon
2009 1. Kairi & Apollon
2008 1. Mare & Dakota
2007 1. Kairi & Apollon