In addition to "regular IPO" our club has been concentrating quite much on tracking. Aivo has developed his own training system over the years and this has led to nice success in tracking by our club members. Article about Aivo's tracking principles can be found here. This approach to tracking training is quite different from the mainstream style and has produced great results.

Here are some highlights.

With his own young dog Daneskjold Hawk Aivo has managed to train 100% according his system in tracking. At age of 2,5 years Hawk was at the podium of Estonian IPO-FH Championships 2015, achieving 3rd place with 183 points (91+92) and qualifying to FCI IPO-FH World Championships as reserve dog. At age 3,5 years he won Estonian IPO-FH Chanpionships and qualified second time to FCI IPO-FH championships. With these results Hawk also became Estonian Working Champion in FH (EST FH CH). The steps of training Hawk can be seen on the video above and some more videos can be found at Tüüp's own page.

In 2014 Aarne Väli with Tulikuuma Sähkövirta and Merike Kungla with Estrellest Hurmuri Käbi were competing at the FCI IPO-FH World Championships in Oberdorla with Aivo being team leader and they placed 10th as a team among 22 countries. We think it is not bad from the country were we usually have 4-5 months brake in tracking because of the snow. 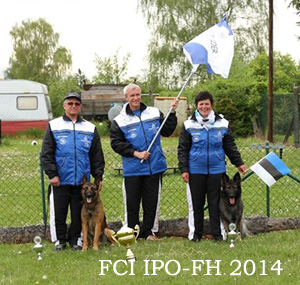 All four people mentioned above trained their first dog and started at their first world championships.

Here are some results we can be proud of in addition to the ones mentioned before. There are also videos of several of these tracks: 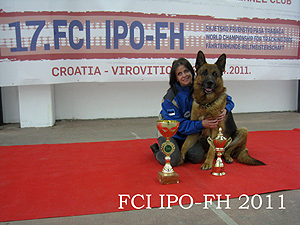 Here is a video compilation about Aivo's tracking system in practice, changing tracking style of the dog and solving variety of different problems.

This dog came to us to train in the spring of 2012 and was already 2 years old with quite much previous back- ground in tracking. There are also links to more complete videos about this dog from different stages below.

After 6 months this dog passed IPO-1 getting nice 97 points in the tracking VIDEO 3.

After one more year this team was at the podium in the Estonian FH Championships.

Aivo has been holding tracking seminars in several countries, getting really nice feedback. Farthest location so far has been New Zealand and closest Finland. Some galleries from these events can be seen here: New Zealand, Latvia, another Latvia :).

Here are some comments about the seminars from the social media:
Natasha "Till those trainings in tracking with you we didn't even realize the process being SO INTRIGUING and CHALLENGING for both dogs and handlers! Till that time I wasn't lost by tracking, nope, I MISSED "tools", but appreciated the core, the essence of it - DOG NOSE. Now I see, what you mean, and with what I would like to feel comfortable to work."

Kasia "From speeding and over-shooting corners to tracking like this on day 4 of our training, to "passing" IPO 1 track on day 7. Can't thank you enough Aivo for the valuable tips! We are inspired to keep on tracking Aivo style!"

Jenny "Then we (and i say we loosely) did a track for dog, the comments wow dog tracked nicely b4 what have you done?? dog was extremely careful, precise, lovely corners perfect articles, i said LOL its the Aivo way of tracking great method, the perfect method, and cant thank Aivo enough for sorting the issues out there"