As a trainer I have been giving quite a lot of seminars, especially in tracking, as people are really interested in my system for tracking. About these seminars you can read HERE. 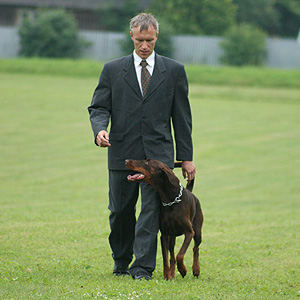 My life with dogs started in early nineties, when my parents took their first dobermann. I think my story of becoming a dog trainer is still quite unusual. In 1994 Estonian Dobermann Association organized an IPO training seminar and called there a trainer from Finland - Mika Myyry, who was Finnish top level trainer and had just achieved team World Champion title in IPO few years before. During the weekend, the basics of tracking, obedience and protection were covered. We were participating at the seminar also with our own dog. When the weekend was about to end, the Finns gave a present to Estonians - a protection sleeve. Now it was time for the group picture and someone had to put the sleeve on. As I was almost only man there, they gave it to me and I put it on … and it stayed there. I had been actually quite scared of dogs since my childhood, as I had been bitten many times. The challenge to overcome the fear of dogs and learn their language was the first driving force for me to start training dog s.

I have been training dogs as a protection helper starting from this year, in tracking and obedience I started later.

My own dogs. The first dog with whom I stepped on competition grounds, was dobermann Hainide Ona-Orcana. The basis for Ona's training was made by Katrin. I started to train her when she had achieved IPO-1 title. Our biggest achievements were

With my next dog, Ona's daughter Deli (Onaoma De-Light), I trained already systematically for higher aims from the beginning.
I participated 4 times at IPO World Championships (3 times IDC Dobermann WC and 1 time FCI WC for all breeds). Our best result was 10th place at IDC IPO World Championship in 2009 in Apolda with 260 points, TSB A (91/84/85). In addition to that I achieved with Deli:

I am very grateful to Mari, who helped me to train Deli in obedience. Unfortunately Deli suffered an injury that put an end to serious training at her best age.

At the moment I am training my next competition dog belgian malinois Daneskjold Hawk, at home just Tüüp (born 2013). As with my previous dogs, I hope to exceed the achievements of my prior dogs. I am writing a blog about training Tüüp at Royal Canin Estonia website. It is in Estonian, but there are also lots of training videos. The blog can be seen HERE. Mari is also supervising my obedience training with Tüüp.

With Tüüp I had the chance to make the best out of my tracking system that I previously used to guide others. That means I managed to do everything 100% in the way I see it from the very beginning. My system in tracking is quite different from the mainstream approach. I am happy to show that it works and I think the results with my own dog are the best proof. I made a video about different training steps with Tüüp that can be seen HERE and at the age of 2,5 years we managed to achieve 3rd place at the Estonian IPO-FH Championships with 91+92=183 points and qualified to the FCI IPO-FH World Championships as reserve team. At age 3,5 years we won Estonian IPO-FH Chanpionships and qualified second time to FCI IPO-FH championships. With these results Hawk also became Estonian Working Champion in FH (EST FH CH).

As IPO consists of three parts, I try to explain my relationship with them. As a helper I have been training dogs in protection already since 1994, so this is obviously the longest period compared to training other two parts and the number of dogs trained to official results is also the largest in protection. I consider obedience to be the backbone of IPO. I think that the obedience performance says the most about dog trainer and is also often decisive part in championships. I am surely trying to achieve perfection in obedience. At the same time I have to say that I enjoy training tracking the most, as there is the greatest possibility to analyze dogs' behaviour and not so many technical components.

Next I write down some facts about my accomplishments as trainer in all three IPO parts.
In addition to my own dog's Working Champion in IPO I have helped to achieve same level also for:

In Estonian IPO Championships there have always been 1, 2 or even 3 of my students on the podium each year (except 2007, 2015).
I have trained following breeds to IPO results: dobermanns, malinois', working and show-line german shepherds, beauceron, giant schnauzer, rottweiler; including first dobermann, malinois and beauceron with IPO-3 result and first beauceron, giant schnauzer and rottweiler with IPO-1 result in Estonia.

TRACKING. I have helped to train many dogs to good results in tracking, but as biggest success I want to point out following:
- Tüüp achieving 3rd place (183 points) at Estonian IPO-FH Championships and qualifying for FCI IPO-FH World Championships as reserve dog at age of 2,5 years
- Deli's tracking result 91 points from IDC WM, that was the 5th best result among all competitors and was achieved in difficult tracking conditions. Video of this track can also be seen at the bottom part of this page.
- With my first dog whom I trained in tracking, I achieved 4 times over 90 points at IPO-3 level and this was already 10 years ago.
- Kairi and Apollon got 19th place at FCI IPO-FH World Championships 2011 with 160 points (78+82), that was first successful result for Estonia at these championships.
- Merike and Käbi got 31st place at FCI IPO-FH World Championships 2014 with 141 points (71+70)
- In Estonian IPO-FH Championships there have always been my students on the podium each year (except 2009).

I have written quite thorough article about my tracking system, it can be found HERE.

- 4 students have achieved over 90 points in FH:

- 12 students have achived over 90 points in tracking in IPO:

OBEDIENCE. In addition to success with my own dog mentioned earlier, I wanted to point out following things:
- I think my best performance in obedience was 86 points at FCI IPO WC. The video can be seen at the bottom part of this page.
- In all IPO-3 competitions, including World Championships, I always gained over 80 points in obedience (15 times), except for the first WC, were the score was 79 p. Highest points were 93.
- I am very proud, that I have helped two teams to win the Estonian Championships in national obedience (KK):

As a trainer I am always ready to help people who have set some goals to reach with their dogs. It is not crucial to start with very big dreams - the goal can also be solving a daily problem. As the dogsport is very close to my heart and I think I have gathered some experience in that field over the years, helping other people to succeed in dogsport is my first choice in training. In order to achieve good results in sport, people have to work wisely and systematically. It makes me very happy when I can pass on my experience in order to help someone reaching their goals faster and smoother. I have never chosen students on basis of the quality of their dogs. I think that every dog has his personal top level and I give my best that he reaches it together with his handler.

I have taken part of many seminars and lectures, the list of them can be seen HERE.

In addition to training, I am also active as a working trial judge. I am FCI international IPO judge and Estonian Kennel Union's KK judge. I have judged Bouvier IPO World Championships (C part), Estonian Championships in IPO (2011) and in KK (2013), also some important competitions in Latvia and Lithuania. I have taken part in FCI IPO judges' seminars 4 times - in years 2009 (Germany), 2010 (Spain), 2012 (Netherlands) and 2014 (Estonia).