Club Sportkoer wishes you nice holidays with your two- and four-legged family members and friends and active year 2013!! 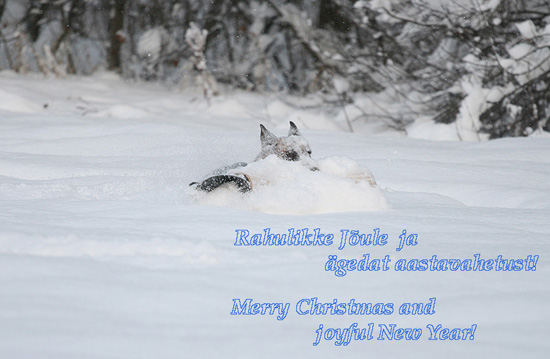 On November 17, we had once again the traditional party to celebrate the end of the season. We had lots of fun, looked back at the accomplishments from the year 2012 and set goals for the next year. We are very satisfied with the past season, as 14 dogs participated in IPO and FH, 10 of them got desired results, there were 17 different IPO/FH results altogether. The aims are even higher for the 2013! 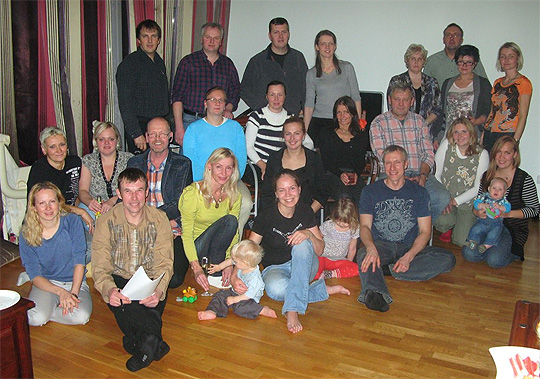 4.11.2012 there was an IPO trial (judge Vilve Roosioks, helper Jevgeni Kaverin), where Ulli & Tukke also participated in. This time everything went well and they achieved nice IPO-3 result: 252p, 85/82/85 TSB A. Congratulations, Ulli, great work and consistency paid off!

Also, one other IPO-3 result has not been mentioned under our news' section - Veiko & Vegas were competing in Latvian German Shepherds' Association's (LVASK) IPO competition (judge Peteris Akimovs, helper Aivo Oblikas) and achieved a great result with 267p (93/88/86 TSB A) and also 2nd place! Congratulations once more!

JÄLJEHUNT 2012 was our annual unofficial tracking competetion for puppies and young dogs. The results were following: 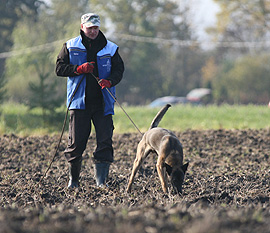 Congratulations to everyone and we wish many successful tracking trainings and competitions for you!

Pictures and videos can be found under respective links.

Photos and videos from the recent IPO trial can be found under respective links.

On 30.09 Sportkoer organized another IPO trial, which is probably our last one this season :). Judge was Vilve Roosioks and helper Aivo Oblikas. The results from this rainy trial day were following:

Congratulations for first-time IPO-1 results to Reelika, Kristi and Monika, for IPO-3 result to Toomas!! You all did a great job out there and achieved nice results as proof of your good training :). For Reelika and Kristi, this was a debute as handlers at the IPO-arena and Eileen is also the first representative of her breed to gain IPO result in Estonia.

We thank everyone who contributed to organizing the trial!

We will soon add pictures from the trial, some videos are already up on our FaceBook page. 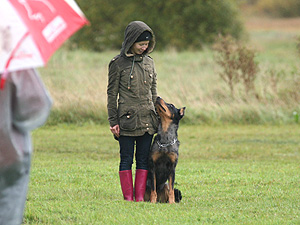 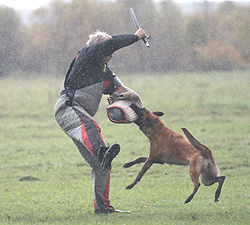 On 9.09 there were ESLÜ FH Championships, judged by Vilve Roosioks from Estonia. 2 teams from our club participated at the highest level. Kairi and Apollon did not manage to get to the end of the track this time, the result was 26p. Merike and Käbi achieved their first time FH2 result with 85 points and also the first place and the title!! Impressive result for a dog, that is only 2y10m old, but at the same time a proof, that wise and systematic training leads to great accomplishments. Congratulations! 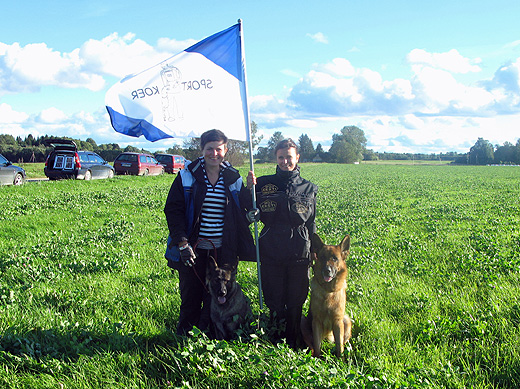 On 25-26.07 there were ESLÜ IPO championships, judged by Tita Poikonen from Finland, helpers were Rene Radala and Tõnu Mägi. There were 6 teams participating, who train in our club and also Iluta from Latvia, whom Aivo has helped with training. Congratulations for Anu with Hundu, who had a really nice debute in IPO: IPO-1 result with 258p (81/91/86 TSB A) and 1. place. 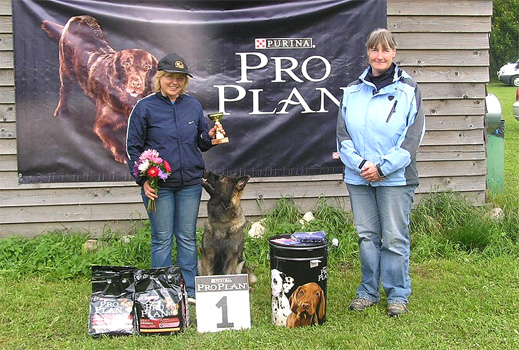 In the IPO-3 level, there wew also some nice moments - Iluta & Bonny had the best tracking score (95p) and Veiko & Vegas best obedience (88p), but unfortunately none of the teams were successful during all phases, so no results this time. We wish all the best for future trainings and certainly the nice results will follow!

Our home page has some new features! The structure of Our Club's page has been changed a little and if you lokk at the dogs' pages, there is now a section for videos of each dog, made during training and trial performances, also there are links to other dogs trained by the same handler.

We added also the Hall of Fame - the page for our greatest achievers, who have been successful enough to reach the top 3 in IPO or FH at national championships or gained Estonian working champion titles.

On 15.08 and 16.08 there BH trials, where judge Urve Lageda decided, that the following dogs are fine members of the society:

On 11.08 the showdogs went to a show - there was the ESLÜ GSD speciality show, judged by Klaus Gothe (Germany), helperwork done by Janar Klement. Protection part was successfully passed by:

Congratulations to everyone for good work!

4.08 there was Sportkoer's IPO and FH trial, that was judged by Tatjana Tšernjakova, helper was Aivo Oblikas. The results were following: Congratulations for Merike and Veiko for new results. Ulli and Reet had some problems with obedience this time, but we hope that next time everything goes well. We thank judge Tanja, owners of white dogs (Kristi, Reelika, Merike) and people in the group, Eve and Andres!

21.07.2012 there was annual Estonian IPO Championship. Dogs' performance was judged by Vesa-Pekka Hirvioja from Finland, helpers were Janar Klement ja Tõnu Mägi. Our club was represented on this big stadium with one team - Merike Kungla & Estrellest Hurmuri Käbi, who achieved their first ever IPO-3 result (245p, 84/81/80 TSB A) and also a really nice 2. place! This is truly a great job, as Käbi is only 2y8m old and thus the youngest dog ever, that has gained IPO-3 in Estonia. Congratulations!

Videos from all the disciplines of Merike's and Käbi's work are visible under Videos. 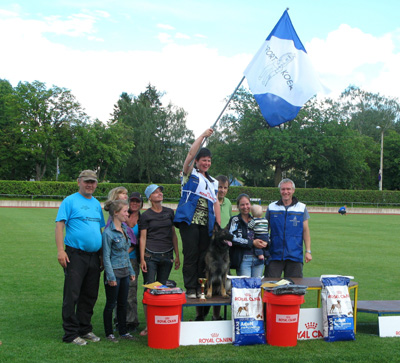 14-15.07.2012 there was GSD speciality show organized by Club Articus. Show was judged by Norbert Wettlaufer from Germany and helper work was done by Tõnis Land & Janar Klement. There were 4 dogs from our club in the working class and they all passed bitework successfully. Congratulations!

Photos from the Sportkoer's training camp added! As the pictures came from two different cameras, they are not entirely in a chronological order. As the idea for the group picture came up a little late, our Latvian friends had already started driving back home and are missing from the picture for that reason. Again, thanks to everyone for coming and for Riho for providing superb training possibilities!

The summer and vacation season have some effect on computer hours :), so the videos from IPO trial in June took some more time to be prepared and uploaded, but now they are available under Videos!

The photos from IPO trial (obedience and protection) are now visible under Photos.

10.06 There was another IPO trial, judged by Vilve Roosioks, Helperwork by Aivo Oblikas. There were 4 dogs from our club and 4 of them got the desired result! All dogs passed protection part successfully

Wunderstern Team Las Vegas & Veiko Väljas did not achieve a result this time (65/88/90 TSB A), but they have great potential for sure :).

Congratulations to everyone, you all did a great job!

We will add photos and videos from the trial soon. 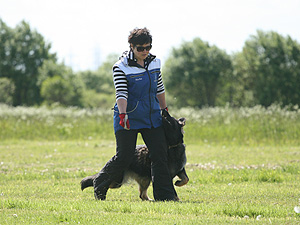 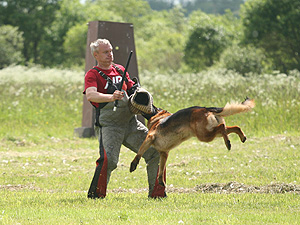 19.05 Sportkoer organized FH competition. Unfortunately there were no results this time, but we hope the experience was still somewhat valuable and gave the handlers new ideas about training. Judge Aivo wrote about thje event to Sportkoer's blog. The article is in Estonian, but there are some pictures and one video about the FH1 :).

Thanks to Helve for making the tracks.

We wish successful training to everyone and hope to see you at next trials!

Pictures from JUNIOR CUP can no be seen under Photos and some videos under Videos!

Good luck for alla of them!

05-06.05.2012 the ESLÜ main speciality show took place, judged by Henning Setzer from Germany. There was 6 dogs, who train with our club, presented in the working class - both old timers and fresh starters - and all of them successfully passed the protection work. Congartulations!

Kairi's jand Apollon's first time in working class was already in 2006, so for them this is a impressive 7th season in this class!

1.05 Sportkoer organized first IPO trial in Estonia this year. Judge was Tatjana Tšernjakova, helper Aivo Oblikas. There we 3 dogs participating, they all train with our club (different phases)

All went well for Veikol & Vegas, who passed all three phases with excellent stability and achieved IPO-1 title with following points: 90+85+90=265, tsb A. Congratulations!

The other two participating teams - Reet with Mona and Toomas with Joop - were a little bit "raw" for the trial level just yet.

Toomas & Joop had a very nice track in quite difficult conditions and earned 91 points. Obedience went also fine, but in protection part the somewhat incomplete preparation for searching the blinds created unexpected situation for the owner and this time the solution for this situation did not allow them to continue. So no IPO-2 result this time, points 91+80+1, but we are fixing this problem with blinds within next weeks and try again.

Reet & Mona were not also 100% at trial level, which is quite understandable for such an early exam. There were many kinds of mistakes and no IPO-1 results this time, points 72+56+7

We wish successful trainings to everyone and thanks to people who helped to organize the trial!
We will add the pictures and videos from the trial soon!

28.04 ESLÜ KK championship took place, judged by Marika Mikk. In addition to champions' level, there were also the lower classes and Kristi & Eileen did a nice job there - 92p and 2. place at KK-1 level. Congratulations for this nice result!!
Photos made by Helve 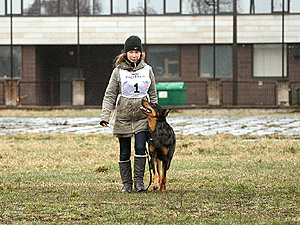 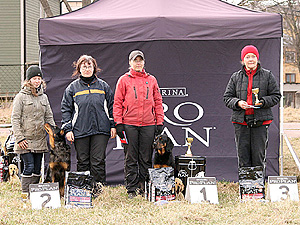 Aivo is back from tracking and obedience seminar in Latvia. Pictures from the seminar can be found under Photos. Thanks to Maris for taking them!

In spring we have a lot happening in our club! Already next weekend Aivo will have a trip to Riga, Latvia to make a seminar about tracking and obedience. After the seminar there will be topics about it on the homepage or in our blog.

As for local activities - in addition to plenty of trainings, we are organizing IPO and PJK trials (1.05), Junior Cup competition for young people (12.05) and FH competition (19.05). Information can be found in the Events section.

For those interested in following the championships around the world - there are lists of competitors available at FCI IPO-FH and FMBB Championships' webpages. Links can be found under Events.

Our start for the tracking season was captured also on pictures. The gallery can be found under Photos. 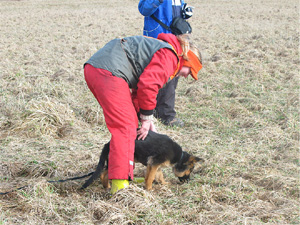 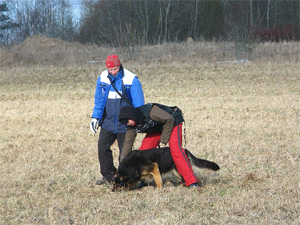 There are some new videos on Videos' page from last weekend - first protection training for puppies and first tracking training in season 2012.

As the spring is coming (snow is starting to melt even here in Estonia ... :), now is excactly the right time to start planning tracking training for the new season! Aivo has written a long article about his system in tracking and this can now be found under Dogsport section.

More pictures from training can be found under photos! Both obedience and protection training covered.

As the spring is coming, there is more and more activity on the training fields. Sportkoer is organizing a little different type of competition in May - Sportkoer's JUNIOR CUP 2012! At this competition, there is a possibility for the young and eager ones to compete with their four-legged friends. We wish successfuul training to everyone and look forward to seeing you in May!

We have had some photographing-activity in oure protection trainings lately :). Some moments from last 3 times can be seen under Photos section. Thanks to everybody who contributed! 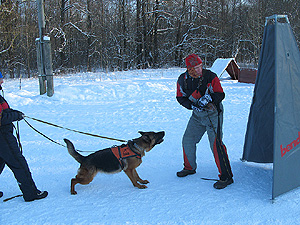 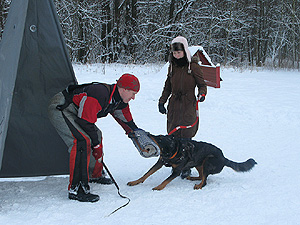 Last weekend the german shepherds had once again to show their best at breeding survey and working class with bitework at special show. Judge was Karl-Heinz Zygadto from Germany, helpers Tõnis Land and Janar Klement (only show). Results:

Congratulations for everyone for good work!

Condolences to Agle for losing her dear friend and training partner Egeria.

Club Sportkoer wishes, that all the dogfriends would have lots of fun and successful activities in 2012!!!